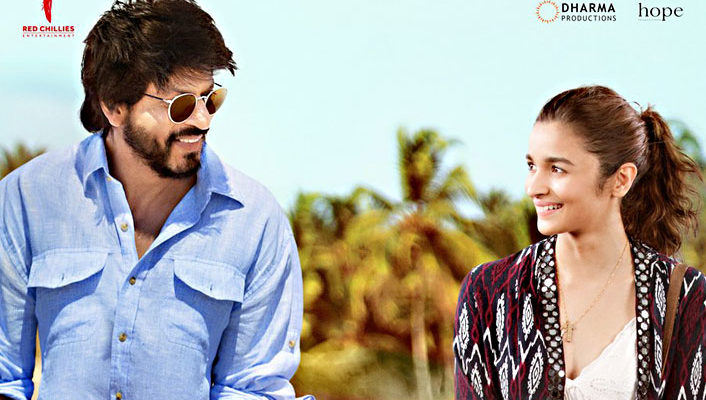 Dear Zindagi , directed by Gauri Shinde, delivers a film that is full hearted and you can’t help but feel touched by this genuine film. After her directorial debut in English Vinglish, Shinde once again steps out the safe zone of filmmaking and through the help of her leading pair; Dear Zindagi teaches you some valuable life lessons that will stick with you even after leaving the cinema hall.
Kaira (played by Alia Bhatt) is a talented choreographer whose goal is to one day direct her own feature film. She’s energetic, lives life very colourfully but is very insecure. Kaira’s life takes a downward spiral when she deals with a breakup and goes through a psychological melancholy with depression. Then enters Dr. Jehangir Khan / Jug (played by Shah Rukh Khan), a psychology doctor who’s there to cure Kaira’s depression and teach her some important life lessons.
Make no mistake about it Dear Zindagi is Bhatt’s film, however, the film really beings when Khan’s character is introduced. The chemistry clicks right away as Jug uses a unique yet funny way to teach Kaira some valuable life lessons by riding bicycles, to playing Kabbadi and walking on the beach. Instead of taking the easy route, Shinde infuses the film with witty dialogues and conveys the film’s message with a sense of humour.
However, not everything works in Dear Zindagi as the pace drastically slackens when Bhatt’s character goes through trauma and the melodrama kicks in. Too long by at least 15 minutes, the film could have helped by some trimming. However, the positives far outweigh from the negatives as the film is beautiful shot by Laxman Utekar, and Amit Trivedi soundtrack is soulful and is placed at the right spots throughout the film.
Despite the minor hiccups the film never derails because Shinde’s main leads don’t miss a beat. Stepping completely out of his comfort zone Shah Rukh Khan delivers a serious, mature, and a riveting performance. Khan speaks straight from the heart and conveys words of wisdoms that stick with you even when the film ends.
To give credit where it’s due Khan takes a backseat and let’s Alia Bhatt do the heavy lifting as Dear Zindagi rests on her shoulders. Bhatt’s character goes from spunky, to energetic, and to depressed and heartbroken. Just watch Bhatt’s facial reactions when she breaks down, speaking about her childhood alone shows how great an actress she is.
I’m going with four out of five for Dear Zindagi. It’s made with heart, and will stick you for some time. Don’t miss this film as it will leave you with a smile on your face.